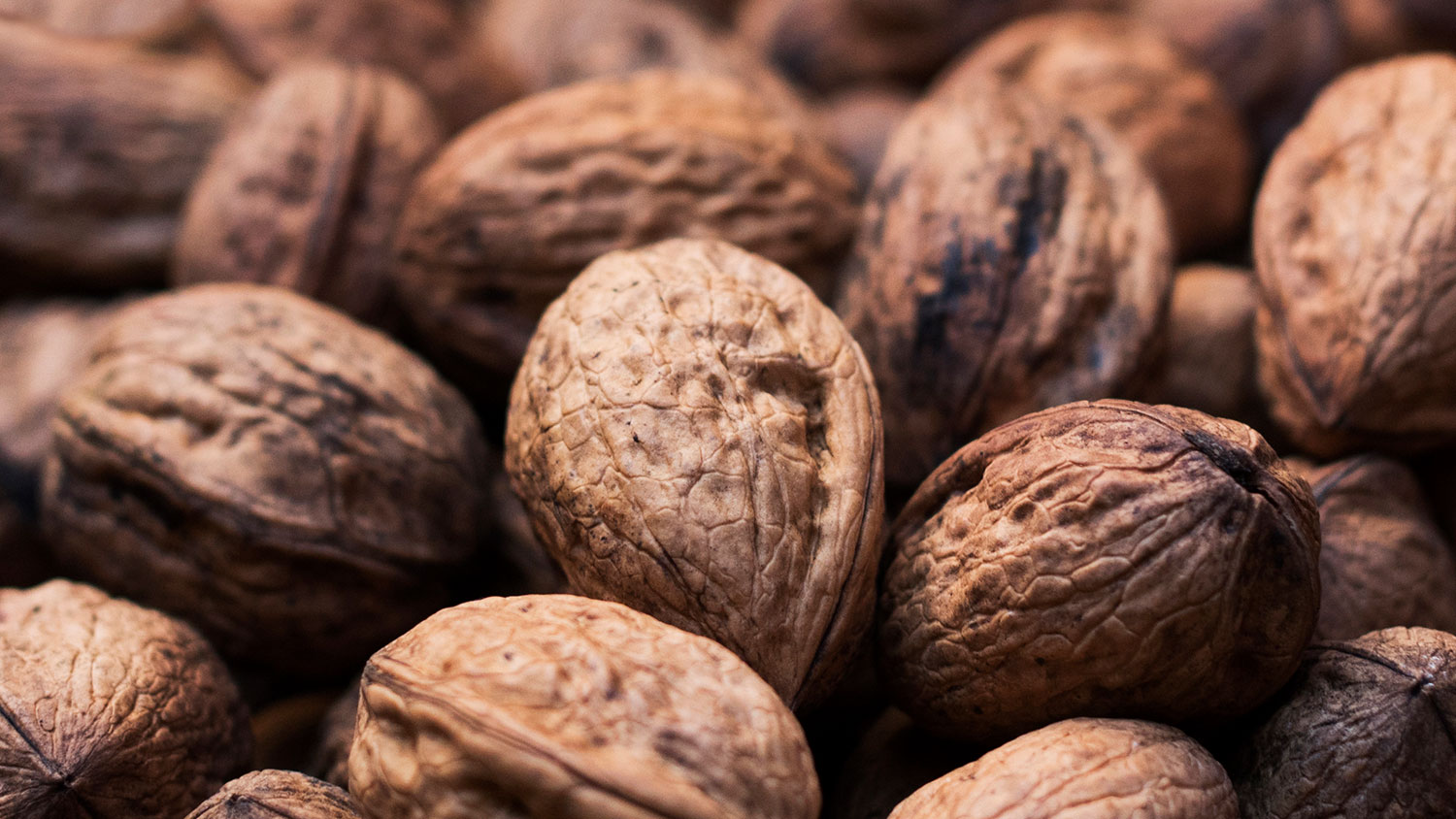 Mu grew up with a large walnut tree in her garden and she has many memories of eating raw walnuts as snacks or sprinkled on top of salads from a very young age. ‘‘Eat seven walnuts a day to keep the doctor away’ is a French saying she would often hear. Each year Mu’s family brings us a large bag of walnuts from that same family tree. So this year when we received our bag from France it seemed logical for us to spend the month researching this tasty nut. 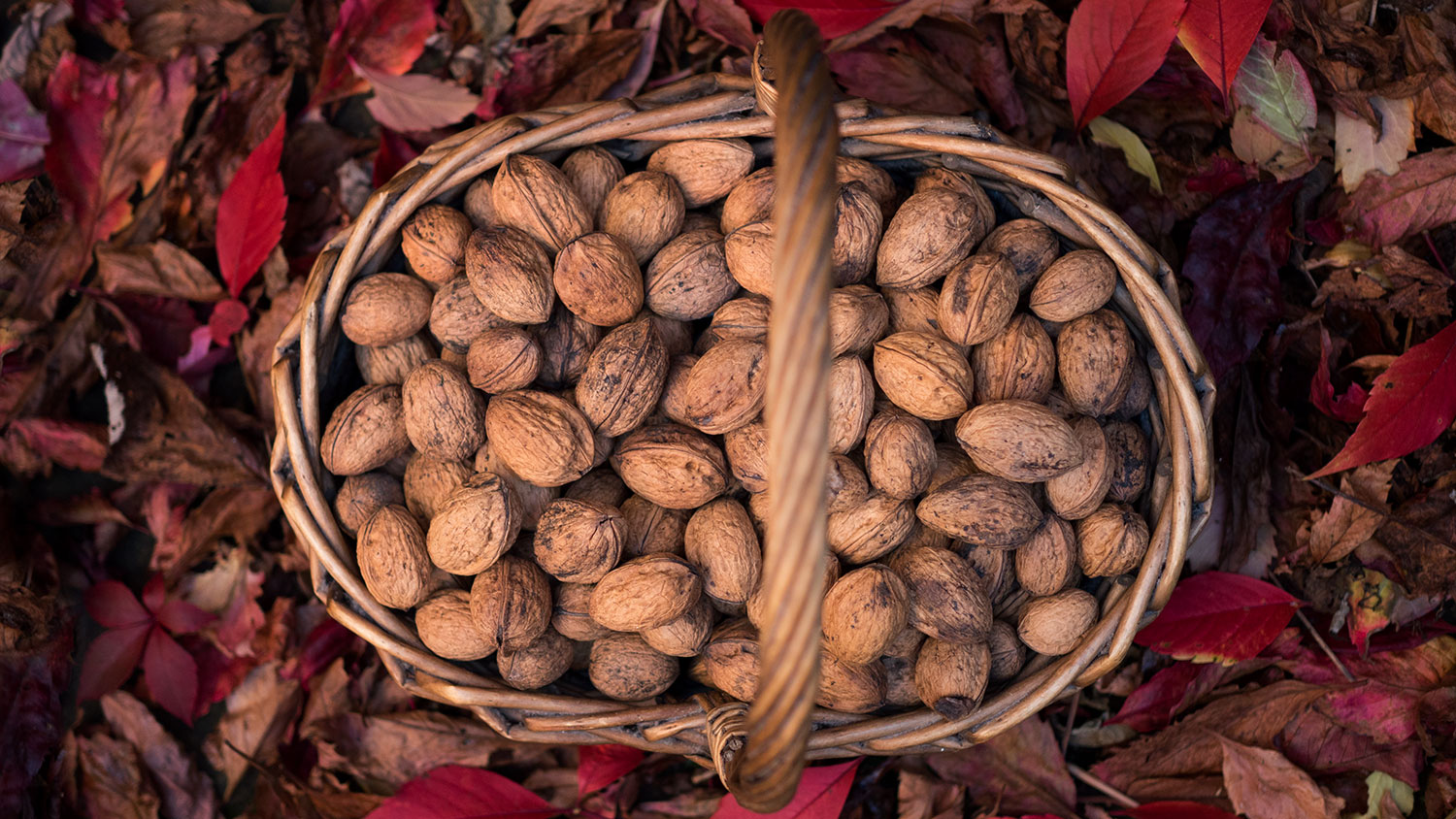 Walnuts have been around for thousands of years and are one of the very first tree foods known to man. They are believed to have originated in Persia from where they have spread all over the world to become one of the most common nuts globally. In France and many other European countries the generic term for nuts is also the word for walnuts (in French une noix). The unique sweet nutty flavor of walnuts is immensely versatile, it’s used all over the world in so many different ways from rich chocolate brownies to pumpkin ravioli to the traditional Mexican dish ‘chiles en nogada’. Walnuts grow well in temperate climates, the largest producer these days is China followed by the US. In Europe the main producers are Ukraine, Romania, France and Italy. English walnut production has been in steady decline since the 18th Century and is now only present in a few counties like Devon, Somerset and Yorkshire. An interesting fact we found was that walnut trees produce a growth inhibitor that has a detrimental effect on other species of plant growing nearby particularly fruit trees. For this reason it is best to plant walnut trees in relative isolation. 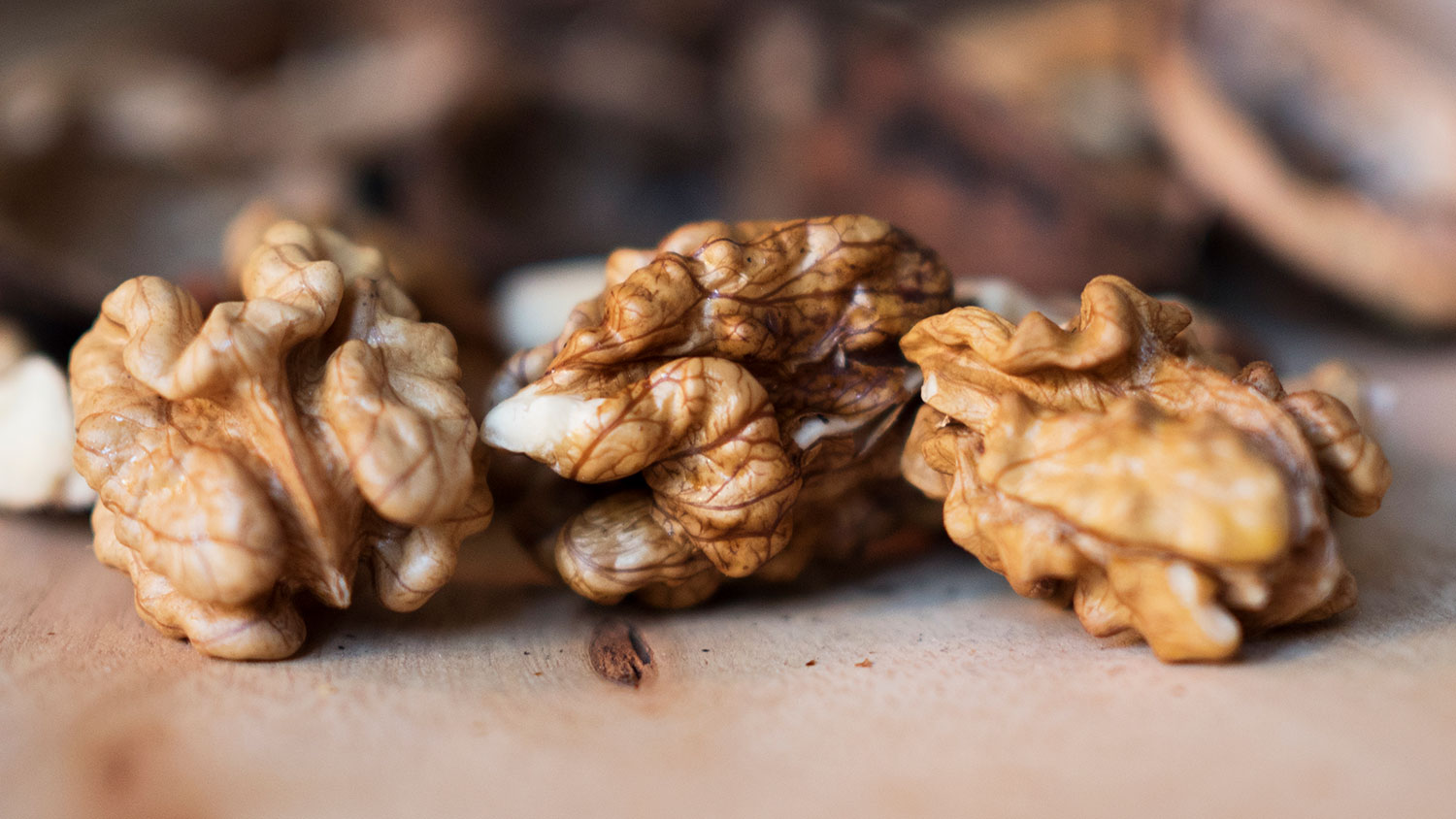 Being a vegetarian family, nuts are a very important part of our diet; they make a highly nutritious snack and add a unique flavor to many dishes. Like all nuts, walnuts are loaded with protein, fibre, vitamins, and minerals. Research has shown that walnuts contain twice as many antioxidants, in fact in a study of over 1,000 commonly eaten food items, walnuts measured the second highest for their antioxidant levels. It is thought that 90% of the antioxidants are found in the outer skin of the walnut; it’s very fiddly to remove the skin anyway so unless you really need them to be sweet and white for a particular dish, leave the skin on.
Unlike most nuts that are full of monounsaturated fats, walnuts are very rich in polyunsaturated fats, the majority of which is an Omega 6 fatty acid called linoleic acid. They also contain a relatively high amount of the healthy Omega 3 Essential Fatty Acid – Alpha Linoliec Acid (ALA) which is very good for heart health and reducing inflammation. Findings from an ongoing study presented in April at the Experimental Biology 2016 meeting in San Diego, CA, indicates that the daily consumption of walnuts has a positive effect on cholesterol levels, without increasing body weight. So there really is something in the old saying “Eat seven walnuts a day…”
Like with all nuts and seeds, raw walnuts contain enzyme inhibitors that make it difficult to digest. If you want to get the most out of your nuts it is best to soak them over night to release the nutrients and also to reduce the phytic acid. You can also remove the enzyme inhibitor by lightly roasting them but this also destroys many of the nutrients. Just like with almonds we recommend you find organic and raw walnuts that have not been pasteurised by irradiation. Because of the abundance of rich oils in walnuts they can turn rancid relatively quickly so they should be stored in airtight containers in a cold dark place. Unshelled walnuts should be shelled only as and when you are going to use them, once shelled they can be stored in the fridge or freezer for up to 1 year. 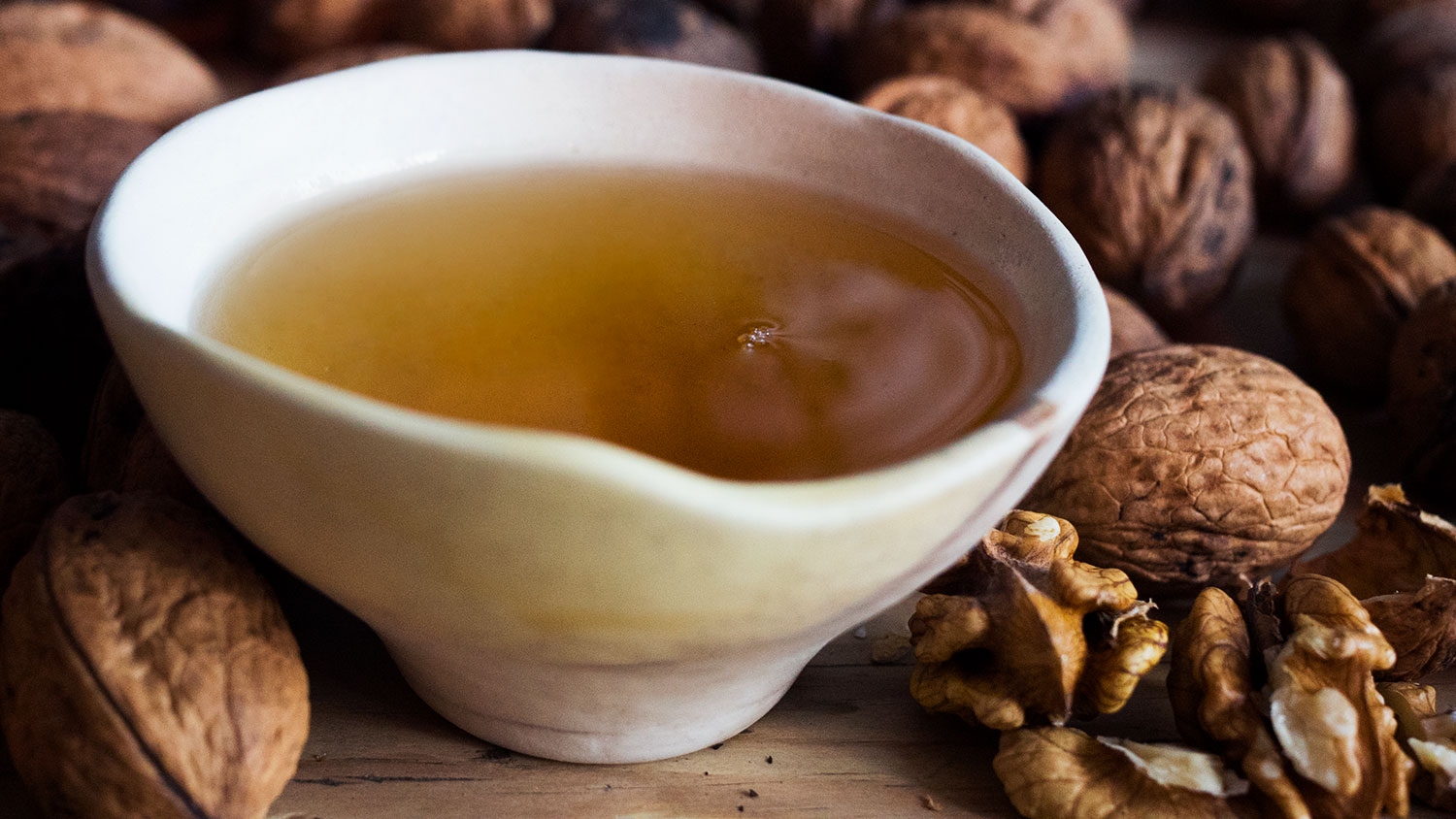 Walnut oil is primarily polyunsaturated fats and is loaded with Omega 3 fatty acids and antioxidants. It is usually expensive and something of a luxury item but while we were in France this summer we picked up a 1 litre bottle of walnut oil from a local farmer at a flee market for 12€. Like all nut oils it doesn’t keep very long (typically 6-12 months) so we have been pouring it onto salads and adding it to all sorts of dishes, it has a glorious flavour that can really boost the most mundane of dishes. There are two different ways of making walnut oil, the more traditional is to toast the nuts first which gives the oil a rich, deep nutty flavour but this also destroys the antioxidants. The other is cold pressed virgin oil which has a lighter, more floral taste and also maintains all the nutrients found in raw walnuts. Typically 35g of cold pressed virgin walnut oil provides the same nutritional benefits as 50g of fresh walnuts. Walnut oil is not really suitable for cooking at high temperatures as it quickly looses it’s flavour, can become quite bitter and looses most of it’s nutritional value. We found it really shines on salads and drizzled on dishes right at the end of cooking.
Below is our recipe for a walnut, cauliflower and watercress soup perfect for this time of year. If you have any thoughts, questions or you have simply enjoyed this post please leave us a comment in the box below.

Method:
Dice the onion and fry over a medium heat until they are soft and taken a little colour. Add the cauliflower, walnut pieces, white wine and then cover with teh stock. Bring to the boil then simmer for approximately 20 minutes until the cauliflower is tender. Meanwhile puree the watercress, (you will may need to add a splash of water or stock to blend the watercress). Once the cauliflower is cooked season the soup well and blend it.
Serve the soup in a bowl with a good drop of the watercress puree and a healthy drizzle of walnut oil. If you like blue sheeses a sprinkle of stilton would work very well with this soup as well.