There is something very unique and exotic about the flavour of cinnamon that can lift the most mundane of ingredients to new heights.  As a family we eat a fair amount of cinnamon, we have it sprinkled on our breakfast oats everyday and our boys have it on their apple compote every night. We use it in Indian dhals, Mexican moles and Moroccan tagines. All over the world cinnamon is one of the most popular spices and an essential ingredient in so many dishes. Cinnamon has been around for thousands of years, there are traces dating back from the Egyptians who used it in embalming. It was the Arabs who introduced it to the West and dominated the trade for Centuries.

There are four different types of cinnamon but it is loosely split into two distinct categories. There is Ceylon cinnamon, sometimes called ‘true’ cinnamon and there is cassia cinnamon. Ceylon cinnamon, as the name suggests originates from Sri Lanka, where 85% of ‘true’ cinnamon is still grown. Ceylon cinnamon comes in thin papery quills that will break easily; it has a much softer and floral flavour and is often referred to as sweet. Almost all other cinnamon is known as cassia and originates from Southeast Asia and is primarily grown in Indonesia, Vietnam, and China. Cassia comes in thick and very hard large quills; it is very strong in flavour and has a bitterness and real spice to it. The word cassia originates from the Hebrew word qtsiah, which comes from the verb meaning “to strip off bark,” which nicely describes how cinnamon is harvested. 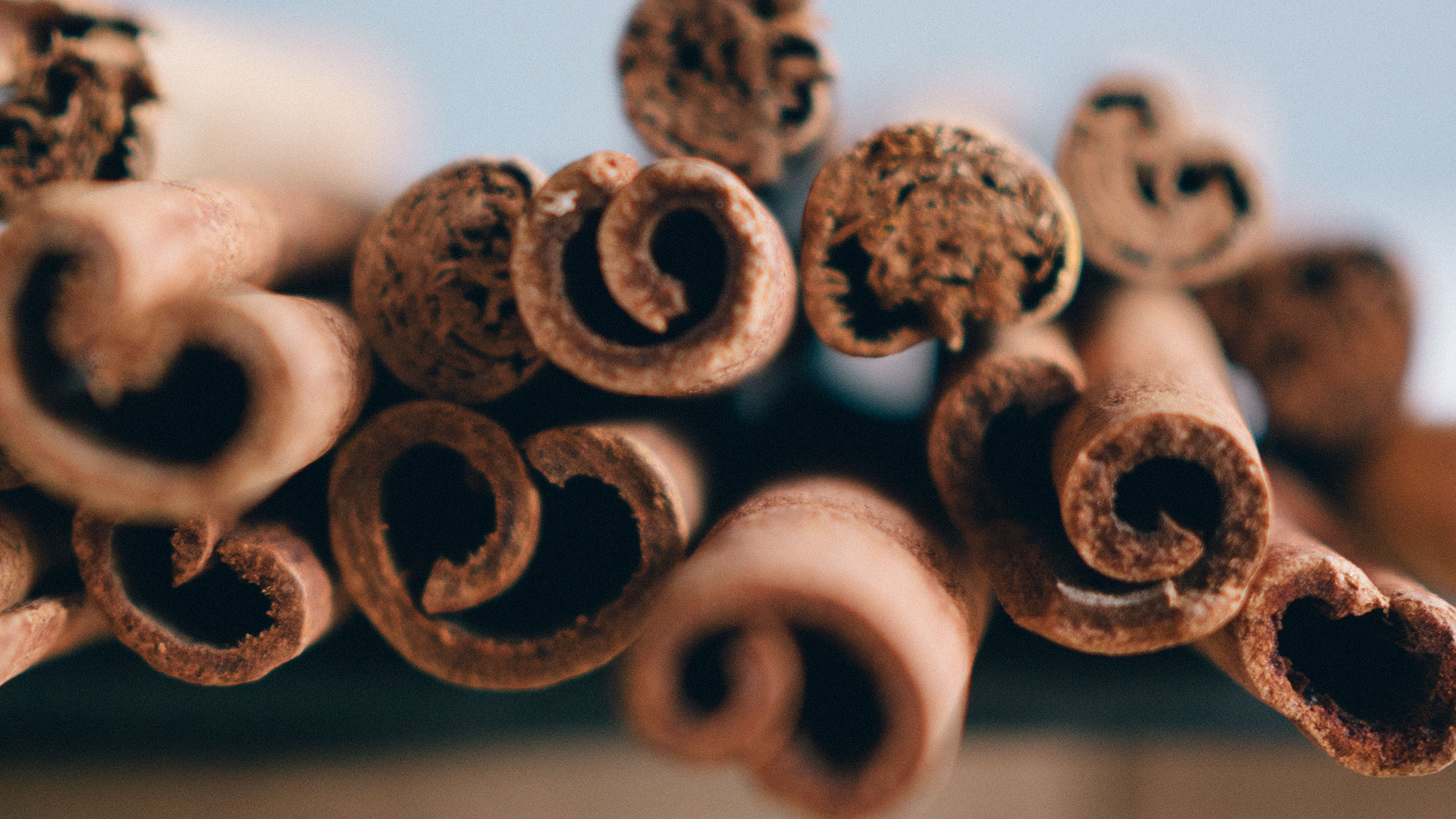 Harvesting and processing cinnamon is still done by hand, on small-scale plantations and with very little mechanization. It is a long process, which consists of allowing the cinnamon trees to grow for 2 to 3 years before cutting them back a few inches from the ground. From here multiple stems shoot up which are allowed to grow for a further one to two years before the cinnamon can be harvested. The outer bark is scrapped off and then the branch is beaten evenly with a hammer to loosen the inner bark. It is this inner bark that carries all the oils in the tree and where the flavour off cinnamon is held. The inner bark is separated in long rolls whilst still wet and then dried. All cinnamon is then fumigated to remove fungal diseases and pests. Traditionally and still now this is done with sulphur dioxide. Sulphur dioxide is one of the oldest fumigant and even though it’s a harmful substance it does disappear over time. How long will depend on the environment the cinnamon it’s been stored in. Grapes are the main crop that gets fumigated with sulphur dioxide and the EU and WHO have very strict rules and regulations on the amount of sulphur dioxide that can remain in a food product. Sri Lanka recently got into trouble with the EU because of its cinnamon having too high levels of sulphur dioxide content. There are alternatives to sulphur, primarily a steam process, but it is a lot more costly and so most cinnamon producers cannot afford the additional expense in the already competitive market. We did try to find out if organic cinnamon uses sulphur dioxide for fumigation or not but we were unable to find evidence one way or the other.

Nutritionally cinnamon is a powerful source of antioxidants, of all the foods in the world it is ranked number seven for antioxidant concentration. The antioxidants in cinnamon have been shown to improve cognitive brain function and reduce brain degeneration. They also have been shown to reduce the risk of diabetes, reduce inflammation and reduce high blood pressure. The oils in cinnamon are a natural anti fungal, anti viral and anti microbial, which is why it was used for embalming in ancient Egypt and is used in many traditional cuisines to help preserve foods. These properties also make it good for preventing illnesses like the common cold.

One of the main flavours of cinnamon is a substance called coumarin, which for people who are sensitive to it can be very damaging to the liver.  For this reason coumarin is no longer allowed as a food flavouring unless it is naturally occurring in the cinnamon.  Cassia has been shown to contain 63 times more coumarin than the Ceylon cinnamon and people who take cinnamon supplements should be aware that they are generally made using cassia. Also, most ground cinnamon is made using cassia rather than the Ceylon cinnamon so if you consume a lot of cinnamon and have liver issues make sure you try to use Ceylon cinnamon.  For us we use Ceylon for sweets and on our breakfast and we use cassia for savoury dishes where it needs to blend with other spices and it needs that extra punch. Like all spices, if you buy them whole and grind them yourself you will get much better flavour than buying pre-ground spices from the shops.

Below is our recipe for a garam masala. The word masala means mix and the word garam means hot, which refers to the heating properties of these spices according to the Ayurvedic diet. A good garam masala is the backbone of many Indian dishes and each household and restaurant has their own unique balance of spices and techniques for getting the most out of each flavour. Without a doubt making your own is a lot better than any shop bought garam masala and will elevate your curries dramatically. Once you’ve made it, it will keep in an air tight container away from sunlight for at least a month, after which the flavour begins to degrade.

Slow roast the whole spices at 110ºC for at least 1 hour, (some people leave the spices to roast overnight), just make sure they do not burn. Place the whole roasted spices in an electric coffee grinder or a food blender like a NutriBullet. Blend the spices into a fine powder and then store in an air tight container. Sprinkle it in right at the end of your curry or dhal to maintain the full vibrancy of the garam masala flavours.

Some useful links relating to cinnamon: